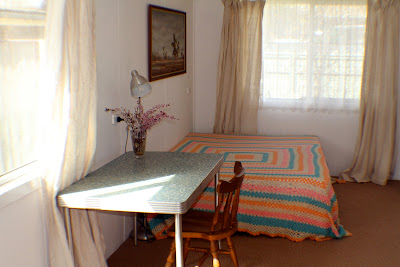 So we're looking to fill our spare bedrooms with creative people from December 2012 onwards. Do you have a great project that you would like to work on here at the Dark Tea? We're offering rent free accommodation to people who have a project to complete within 1 week to 2 months. Please email alexpye3@gmail.com with information on your project idea and we'll be in contact with you.
Posted by Alex Pye at 3:13 PM No comments:

Very soon The dark tea time of the soul will be putting out a call for proposals. We'll be looking for creative people to come and stay at the house and make the most of our facilities to further their projects. If this sounds interesting please return in the next few days for more updates. We will be seeking applications for the period of December 2012 onwards.

Did you read this article about us in the Western Advocate?

This is our profile in Arts Sunday, written by Maryanne Jaques from Arts Out West.
Posted by Alex Pye at 3:43 PM No comments:

Here is a great article from Shareable which discusses the drive behind working in regional vs city enviroments.
Posted by Alex Pye at 3:39 PM No comments:

The Dark Tea Time of the Soul is an artist run project space located in Cumnock NSW. It is a joint venture between Alex Pye and Yasmin Smith, both visual artists, who moved to the area recently from Sydney. This move was motivated by the struggle to fund a sustainable artistic practice in Sydney due to its rising cost of living. They lived on a sheep and cattle farm for 6 months before moving into a house in Cumnock, a small town with a population of about 200. The Project is in its first stages of development with renovations taking place on the house and the garage/ studio/workshop.
The Dark Tea Time of the Soul will commence its program in September 2012. This will include a low cost residence for artists and creative’s, a venue for one off arts and cultural events such as film screenings, health retreats, music events and workshops and an evolving and dynamic project space that provides an alternative to artist run initiatives in large cities.

Directors Bios
Alex Pye is a visual artist who graduated from Sydney College of the Arts with Honours in 2011. Her practice incorporates painting, sculpture, performance and installation. She has exhibited at numerous artist run spaces in Sydney such as Kudos Gallery, Peloton Gallery, Eastern Bloc and At the Vanishing Point Gallery. In Sydney Alex worked in radio as the breakfast presenter for the community station FBi 94.5fm from 2008-2011.
Since moving from Sydney to Cumnock in regional NSW Alex has been creating works as a study of displacement – the movement of something from its place or position and the consequent trauma or anxiety that this may evoke.
Yasmin Smith completed her masters of visual arts at Sydney College of the arts in 2010. Yasmin works mainly with ceramics, sculpture and object making as well as watercolour drawing. She was a co-director of the artists run initiative Locksmith Project Space located in Redfern, Sydney between the years 2007 and 2010. During this time the directors of the space self-published three issues of the serial art publication Locksmith Project. Locksmith Project Space provided a rent-free exhibition space for visual artists as well as a space for the monthly music event Space habit.
Yasmin has exhibited in Sydney galleries including Firstdraft Gallery, Peloton Gallery, MOP, and Kudos Gallery. In 2010 she participated in Structural Integrity at Nextwave Festival in Melbourne which brought together members of different artists run initiatives from around Australia and Asia for a month long residency, finishing with a group exhibition. She was also a member of the Mattress Box Collective in Berlin in 2007 where she lived in a shopfront with seven other Australian artists creating and exhibiting work over a period of three months. Yasmins experience with Locksmith Project Space, Structural Integrity and Mattress Box Collective has influenced her to work further in creating alternative structures of ARI’s that can foster the development of emerging and mid career artists. Yasmin is represented by the Commercial Gallery, Sydney.
Posted by Alex Pye at 4:04 PM 1 comment: